The Brothers of the Good Shepherd arrived in Hamilton in 1961 at the request of Bishop Joseph Ryan. They set up a men’s hostel in an old building at the corner of MacNab and Vine Streets where they offered food and shelter to mostly transient or homeless men.

As the needs of the community grew, so did the services provided by the Brothers:

1982 – The Volunteer Outreach Program is established

2001 – The HOST Program in Toronto is established

2007 – The Barrett Centre for Crisis Support is officially opens

2014 – The Jeanne Scott Parent & Child Resource Centre opens next door to Regina’s Place (formerly Angela’s Place). In partnership with the Hamilton-Wentworth Catholic District School Board, Good Shepherd operates a school for young mothers while on-site child minding is provided for their children.

2014 – The Venture Centre Marketplace opens on Cannon Street East to offer a more efficient and dignified emergency food and clothing program, counselling centre and programming designed to break the cycle of poverty. The spacious and bright public area is easily accessible and provides a positive environment for clients, volunteers and staff.

2015 – The Little Brothers of the Good Shepherd fuse with the Hospitaller Order of St. John of God and become the Hospitaller Order of St. John of God – Province of the Good Shepherd in North America. The fusion provides an opportunity to draw upon the strengths of a much larger religious order while not affecting the programs and services provided by Good Shepherd or the name of the organization. To learn more about the fusion, watch the video Mathias and John: A Fusion of Hospitality.

Watch the Ritual of Surrender and Fusion Celebration video 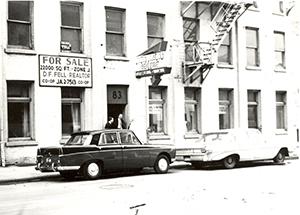